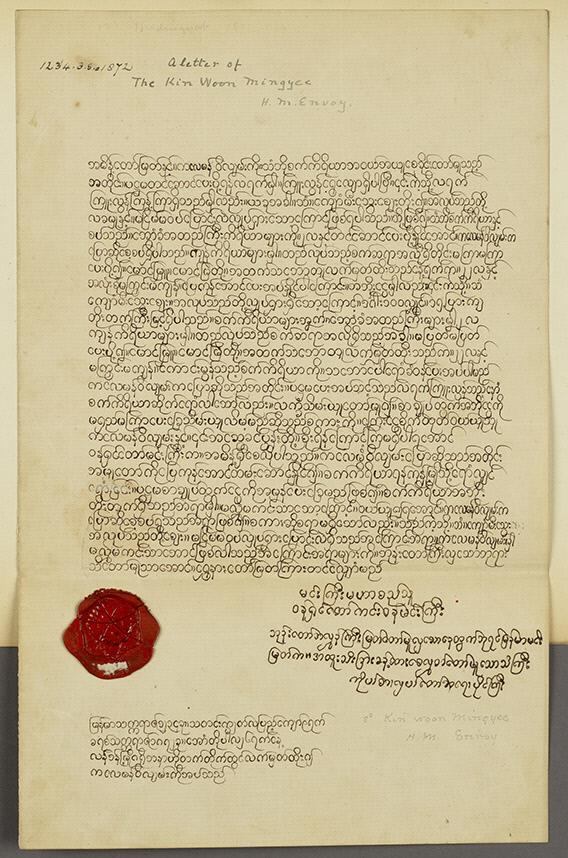 A rare letter from the Kinwun Mingyi to Clement Willams

Clement Williams is a very interesting figure in 19th century Burmese history. He first arrived in Burma in 1858 as an Assistant Surgeon in the British Army. He then went on to become the (British) Political Agent in Mandalay. He spoke Burmese fluently and impressed King Mindon, who came to see him as a friend. Within a year however he was replaced by bitter rival Colonel Sladen.

Over the 1870s he lived in Rangoon as a businessman and an agent for British companies seeking commercial contracts in Mandalay. He also acted as an agent for King Mindon, buying capital goods in the UK and elsewhere for the King's efforts to establish modern industries in Mandalay.

This letter is part of a correspondence through which Williams bought and transported from Bristol an entire iron smelting plant. These projects are a reminder of the Mindon government's energetic drive to modernize what remained of the Burmese kingdom.

Williams also assisted the Burmese embassy to the UK led by the Kinwun Mingyi in 1872. He died of typhoid in Rangoon in 1879.