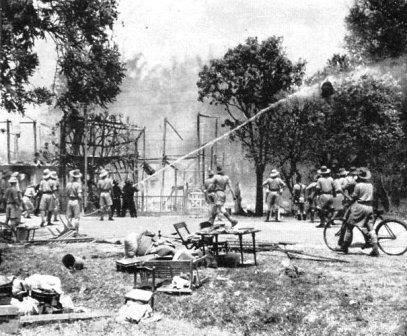 On the night of 3 April 1942, Japanese Mitsubishi bombers attacked the old royal city with incendiary bombs, creating a gigantic firestorm. Two-thirds of all the buildings in Mandalay were destroyed. At least 2,000 - 8,000 people died and more were injured (Out of a population of about 150,000). Blackened and rotting bodies filled the moat. Everywhere in the scorching heat was the smell of death. The city emptied. My father, then ten years old, fled with his family on horse-cart to a village near Mingun, where he spent the rest of the war as a novice in a local monastery. By 5 April almost no one was left. Clare Booth Luce, wife of Time and Life magazine publisher Henry Luce was there that evening and saw everywhere only stinking corpses and ruined buildings. She wrote: "tonight, there is no Mandalay". The Japanese 15th Army was approaching from Prome and would seize the city 3 weeks later. Chinese Nationalist armies (the "China Expeditionary Force Burma") had been defeated at Toungoo (on 3 March) and would soon be forced from Lashio (29 April); British and Indian forces were retreating towards Maymyo and Myitkyina before crossing into Assam. The photograph shows Burmese firefighters and Burma Army soldiers attempting to put out fires the morning of 4 April in Mandalay town.