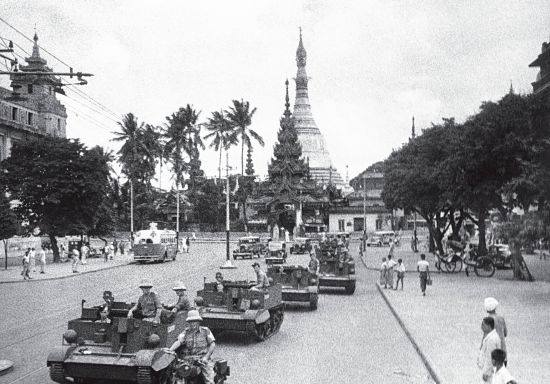 It was in Feburary, 1942. The city was in near chaos, with hundreds of thousands of refugees fleeing the heavily bombed downtown and dockyards, electricity lines severely damaged, and food supplies running short. The Japanese 15th Army were advancing north from Moulmein. The 17th India Division had hoped to halt the advance at the Sittang River but would instead soon meet with disaster. The entire rest of the country was defended by only one other division: the 1st Burma Division (headquartered at Toungoo, with two brigades of Burma Rifles and one brigade of mainly Punjabi and Rajput infantry). The 7th Armoured Brigade (the "Desert Rats", who had been battling the Italians in North Africa) would soon arrive to protect the city and then cover the British retreat north. The British retreat from Rangoon to India over the next four months would be the longest in UK history. Tens of thousands would die and most of Burma's modern infrastructure destroyed.