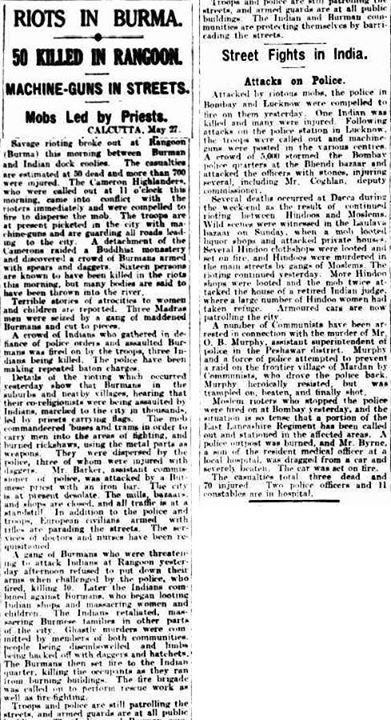 May 1930 communal violence in Rangoon.

In late May 1930 communal violence erupted in Burma for the first time in modern history, leaving 120 dead and 900 wounded in Rangoon. Fighting between hundreds of Indian (mainly Telugu) and Burmese dockworkers had spread quickly, and many innocent men, women and children were hacked to death in the riots that began 29 May and continued for nearly two weeks. The Cameron Highlanders were brought in immediately but were unable to contain the violence for many days. They set up checkpoints along Prome Road and other avenues into the city and raided several Buddhist monasteries where they found stashes of weapons. Machine guns were mounted along Fraser and Dalhousie Streets and armed units patrolled all of downtown from Mughal Street east. This is a clipping from an Melbourne newspaper after the first day of the riots.