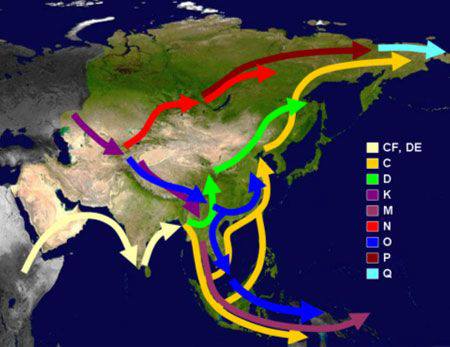 The genetic history of people in Myanmar

I've always been interested in the genetic history of people in Myanmar but there is very little information, as very few studies have been undertaken here compared to other countries. In 2013 I took a DNA test in the United States. The test reveals both (1) my paternal line (Y-chromosone) haplogroup and (2) my maternal line (mtDNA) haplogroup.   "Burmese", "Myanmar", "Bamar" etc are recent identities. Both my parents and all four of my grandparents are "Burman" or "Bamar" but that actually says very little about deeper ancestry.The test reveals that my paternal line haplogroup is O2a1a and my maternal haplogroup is M7b1. The map is a map of the the possible spread of Y-chromosone haplogroups in Asia . The "O" family of haplogroups originated in Asia around 35,000 years ago. The O2b "branch" of the family migrated north and became the ancestors of many Koreans and Japanese. Almost a third of Japanese men for example are descended from the O2b1 "subbranch". The O2a "branch" however spread across parts of southeast Asia and is specifically linked to early Austroasiastic peoples like the Cambodians and the Khasi in India. It is found at extremely high frequencies amongst isolated Austroasiatic peoples like the Nicobarese. It is also found amongst Tai peoples in Yunnan and Tibeto-Burman speaking groups like the Hani, suggesting that speakers of these languages are descended in part from older Austroasiatic populations. So even though my ancestors may have been speaking "Burmese" (which likely entered from the north) for a few centuries, they were at least partly descended from peoples who have been in "Burma" for thousands of years. The "M" family of haplogroups (on my maternal side) is another very old family that originated 60,000 years ago, around the time the first humans left Africa and entered Asia. It is found in people as far apart as aboriginal population in Australia and native Siberians. My M7 "branch" is found across east Asia, with one "subbranch" being particularly prevalent in Japan. My particular "subbranch" M7bi is quite common in parts of mainland southeast Asia and southern China (eg amongst the Hmong) and may be linked to an early diffusion of Austronesian peoples from that area. There's much more to Myanmar's ancient past that remains to be discovered.

Explore more in Before history