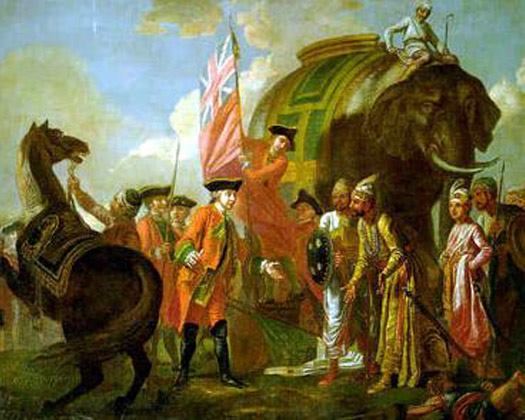 Alaungpaya’s occupation of Pegu and the defeat of Hanthawaddy kingdom

On 5th May 1757, Pegu fell to the forces of Alaungpaya, ending the war between the upper and lower Irrawaddy valley, extinguishing the Hanthawaddy kingdom, and establishing the Konbaung as the new rulers of all Burma. The war had taken place within the context of the global “Seven Years War” whose battlefields stretched from Quebec to Pomerania to Bengal. In Burma the Konbaung were aided by the British, whereas the Hanthawaddy kingdom under its Mon ruler Bannya Dala was actively supported by the French and their Governor-General Joseph-François Dupleix, who dreamed of a Burmese empire.

Image shows Robert Clive is the East India Company and Mir Jaffar of Bengal after the English  victory at Plassey in June 1757 - just one month after the fall of Pegu.