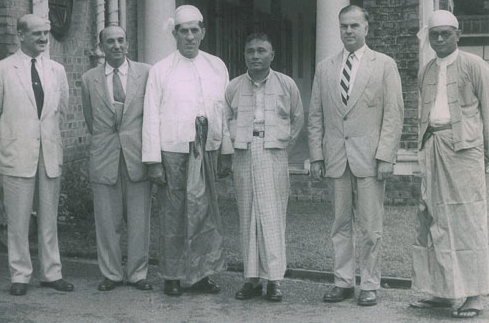 Foreign Advisors and Officials of Myanmar in the 1950s

Foreign development advisors and aid officials are nothing new to Myanmar. Here's a photograph from March 1953 showing Prime Minister U Nu with chief advisor Louis Wallinsky (far left) and consultant Robert Nathan (in the center, in Burmese costume). ICS U Hla Maung is on the far right. It could be said that the hard work dozens of Burmese officials and businessmen, combined with reasonable government policies and the help of these international experts, had brought a fair degree of prosperity by the late 1950s, exceeding the China and India of the day, until politics went from bad to worse, ethnic and ideological divides remained unbridged, the army took over, and the country was shut off to the world.