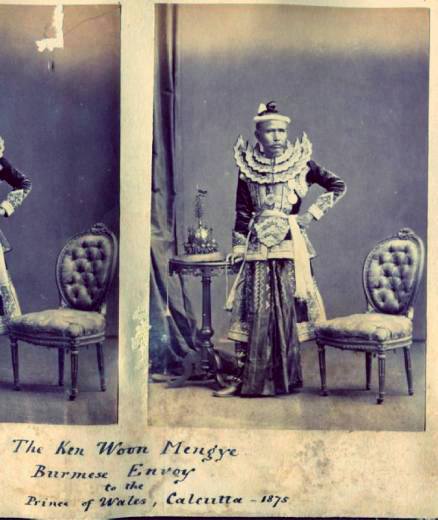 A very rare photograph of the Kinwun Mingyi taken during his visit to Calcutta in 1875. This was a turning-point in Anglo-Burmese relations. The ostensible reason for the trip was to meet the Prince of Wales (the future King Edward VII) who was then on a tour of the Indian Empire. But his trip was also a last ditch attempt to repair rapidly deteriorating relations with the British. By 1875, British interference in Burmese internal politics was growing by the day: British spies were encouraging dissent in court circles, British territory was being used by exiles to plot King Mindon's overthrow, and British arms being secretly sent to rebels in the north. The King had already given up hope of a treaty of friendship with London and this diplomatic effort by the Kinwun would lead nowhere. By 1878 the British were planning a full-scale invasion of Upper Burma.