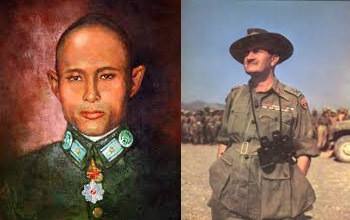 General Aung San crossed the Irrawaddy at Allanmyo on 15 May 1945 and then flew to Meiktila on 16 May to meet for the first time with Lt General William Slim, commander of the (British) 14th Army. The 14th Army with nearly one million men was the largest Commonwealth army anywhere during World War Two - a giant force of Indians, Africans, British, Gurkhas, Burmese and others. By 16 May, the 14th Army had already retaken Rangoon and General Slim would soon be promoted to commander of Allied Land Forces South East Asia under the Supreme Allied Commander Lord Louis Mountbatten. Burma was then terrible shape, with it cities and infrastructure destroyed, and major food shortages leading to famine-like conditions in many areas. General Aung San as head of the Burma National Army asked to be recognised as an Allied Commander. This was refused. General Slim told him that the 14th Army were "destroying the Japanese quite nicely" already. General Slim instead proposed and General Aung San would later agree to be treated as a subordinate commander, with his troops rationed by the 14th Army where possible and reporting to the nearest Britiish commanding officer. The BNA would help fight dacoits and "deal drastically" with remaining pockets of Japanese. General Slim was very impressed by the much younger General Aung San (who appeared in the near-uniform of a Japanese officer, much to the surprise of the British staff officers who had not been forewarned). He found him intelligent and straight-forward. He said to him: "Go on Aung San, you only come to us because we are winning!" General Aung replied simply: "Well it wouldn't be much good coming to you if you weren't, would it?". With this exchange, the relationship between the reoccupying British power and General Aung San was sealed, creating the dynamics that would ultimately lead to the London agreement 19 months later.