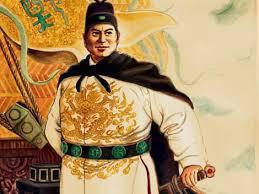 One of the greatest explorers in world history was a Panthay Muslim from the Burma-Yunnan border. In 1413, a great fleet of Chinese ships were arriving for the first time along the African coast (they would bring back with them, amongst other things, a giraffe for the Ming Emperor's menagerie). This was the fourth of seven monumental voyages (all in the early 15th century) commanded by the great admiral and imperial eunuch Zheng He. Each voyage involved a fleet of hundreds of ships and up to 30,000 sailors, traveling across the Indian Ocean, a campaign of "shock and awe", that brought knowledge of Chinese wealth and power to places as far away as Ceylon and Somalia. Zheng He (born Ma Sanbao) was the great-great-great grandson of Sayyid Ajjal Shams al-Din Omar al-Bukhari, the Persian administrator of Yunnan (before Chinese rule of Yunnan), whose family governed the Burma-Yunnan borderlands for generations. They and other Persian and Turkish settlers formed the core of the "Hui" or "Panthay" community in Yunnan. Their descendants live today in Pangsang, Lashio, Maymyo, Mandalay and elsewhere in Myanmar as well as in Yunnan.