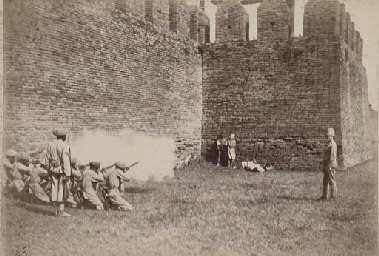 A British firing squad executes Burmese 'rebels' outside the walls of Mandalay.

The Third Anglo-Burmese War had lasted only two weeks, leading to King Thibaw's surrender in November 1885. But the real fighting was only just beginning and would last nearly 5 years. There was no single resistance against the new occupation, but many different groups, led by Konbaung princes, various myoza and myothugyi, Shan chiefs, and others. The British invaded Upper Burma and won the Third War with 10,000 men. But 40,000 were required for the 'Pacification' of 1886-7. Thousands of Burmese died in the fighting, tens of thousands from the related famine. It was this fighting that made the British decide against their original idea of ruling through a new Burmese king and instead rule directly (except in the surrounding highlands).