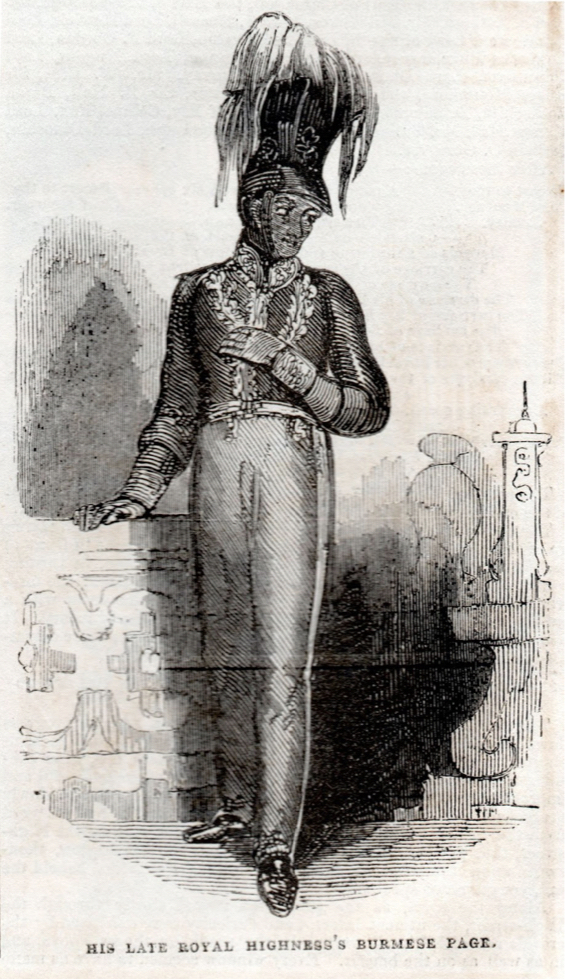 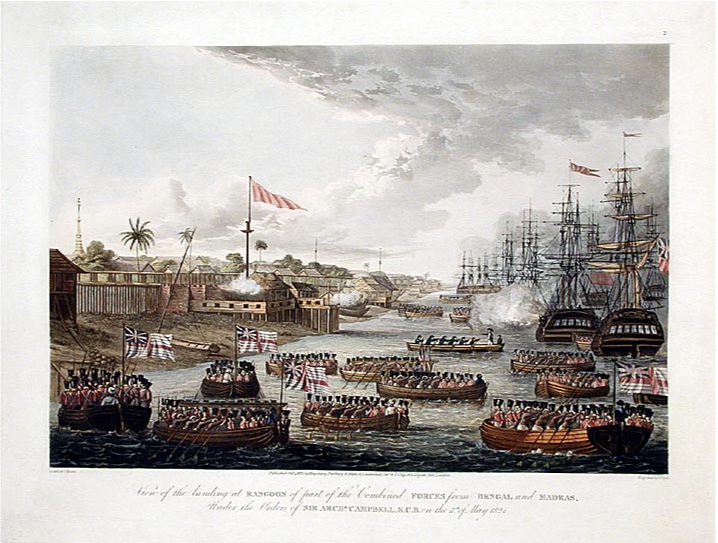 A descendant of Burmese royalty who served at Victorian court

Sophar Rangoon (c. 1817-1890) was a trained tailor and senior page to the British Prince Augustus Frederick (1773-1843), who was the Duke of Sussex and a favorite uncle of Queen Victoria.

Sophar claimed to be descended from a “chief of the Kingdom of Ava,” but how did this supposed son of a Burmese nobleman end up serving at Kensington Palace in London? The truth lies shrouded somewhere in the gunsmoke and cannon-fire of the British military operations surrounding the First-Anglo Burmese War (1824-1826). As with many historical events, there are multiple versions of what happened.

The first involves the British naval officer Frederick Marryat. According to Marryat’s daughter and biographer Florence, Marryat was serving as captain of the third-rate frigate HMS Tees during the British assault on Rangoon in 1824.When he returned to England after the British victory, he brought with him a number of Burmese artefacts as spoils of war which he then donated to the British Museum in an unsuccessful bid to become a trustee.“But the most unusual gift was that of an eight-year-old Burmese boy, whom he had brought home in his ship,” wrote Florence. “Said to be a chieftain's son, Sofar was presented to the King's brother and sixth son of King George III, the Duke of Sussex, as a page and was soon to be seen at Kensington Palace and Windsor Castle.”This story was later reproduced in Marryat’s biography by the author Tom Pocock.

But Sophar’s biographer Lily Style maintains that Marryat’s own diaries record nothing about Sophar, and that it was highly unlikely that the Duke of Sussex, a well-known abolitionist, would have accepted the gift of a human child.Instead, she believes that it was her ancestor, the British naval captain Edward Blanckley, who transported Sophar to England on the HMS Liffey and likely gained him a position in the Duke’s employ.

This version of events corresponds with a newspaper account from 1825, which states “at the commencement of the Burmese War, one of the boat’s of his majesty’s ship Liffey came up with one of the Burmese war boats, when every man on board the latter jumped into the water; and on boarding the boat, our tars [sailors] found a Burmese male infant a few months old…the Captain intends to bring home the poor foundling, and educate him in England.”

Blanckley was captain of the Liffey, and, moreover, Sophar’s own descendents have passed down a story that he was rescued from a boat by an Englishman and whisked off to England. The Blanckleys believe that when Edward found him, the baby was dressed in princely clothes, lending support to Sophar’s claims throughout his life that he was a son of a “Chief of the Kingdom of Ava” (this would also match up with the strict sumptuary laws in place at the time which dictated that only members of the royal family could wear certain kinds of expensive clothes).

Depending on when and where Sophar was found, he could conceivably have been a son of the Myo-sa (governor) of Rangoon, Mon Shwe Thar, or one of the sons of the Prince of Tharawaddy, the leader of the Burmese armies besieging the city. (It was not uncommon for Burmese kings to bring their wives and children with them on campaign). But in the absence of concrete evidence, Sophar’s royal connection must remain speculative.

If he was picked up by Blanckley, which appears likely, the troops on-board the Liffey would have looked after the baby. At some point, he was given the name Sophar after the Biblical character Zophar and received a surname after the place where he was found: “Rangoon”. Blanckley had lost a child in the months before the War, and it is likely that he cared for the infant as his own.

Whatever the case, we know for a fact that Sophar arrived in England in 1825 and was employed as a royal page by the Duke of Sussex and apprenticed to a tailor in the City of London by 1840. Far more than just servants, royal pages were the distinguished male attendants of the princes and kings of England. Moreover, Sophar’s intimate connection with the Duke (dressing and bathing him) and his high position within the royal household would have made him privy to important state secrets.Sophar was evidently esteemed enough to march in the Duke’s funeral procession in 1843 and was selected as one of two pages to stand at attention in the room where the body lay in state.

A newspaper account of the funeral included a picture of “His Late Royal Highness’s Burmese Page”. Sophar is pictured dressed not in Burmese style, but in the fashionable outfit of the English court, replete with long trousers, golden embroidery and a large feathered cavalryman’s cap. He was then about 27 years old.

His expression suggests that there was also a playful side to his personality — a family story has him climbing every tree in Kensington Palace Gardens.

After the Duke’s death, it appears that Sophar struck out on his own as a tailor to wealthy clients. In 1844, he married an Englishwoman, Margaret Sophia Green, with whom he would later raise six sons and one daughter. One of these sons was called Frederick Augustus after the prince, another was called Edward, after Edward Blanckley. The Rangoon family would later fall on hard times and be forced to move from slum to slum until the 1870s when they were able to afford a modest home in one of London’s leafy southern suburbs near Crystal Palace Park.

Sophar died there of pneumonia on 22 January, 1890, the year in which the British consolidated control over the whole of Upper and Lower Burma. He was buried in an unmarked common grave in Lambeth Cemetery.

From the battlefields of Burma, to the gilded halls of Kensington Palace, to the smoke-filled slums of Victorian London, Sophar Rangoon’s life spanned the highs and lows of British and Burmese society at the heart of the 19th century.