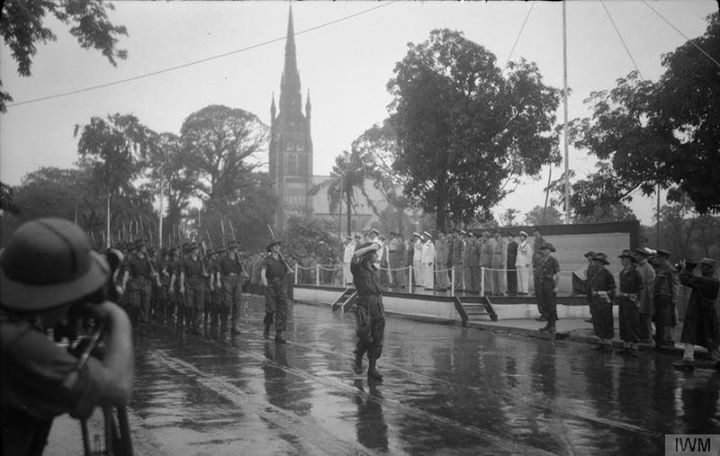 On 15 June 1945 Allied forces under Supreme Allied Commander South East Asia Admiral Lord Louis Mountbatten held a victory parade over the Japanese Empire. Lord Louis Mountbatten took the salute together with other Allied commanders including General Aung San, who had just been given the rank of "Deputy Inspector General". The march past included units of the Indian Army, the Royal Navy, the Royal Marines, the US Army, the Chinese Army, and the "Patriotic Burma Forces" under General Aung San. The new flag of the AFPFL was allowed to fly alongside the flags of the UK, France, Netherlands, and other United Nations members. The photograph shows Allied forces marching past the reviewing stand which was near the intersection with Montgomery Road, near Jubilee Hall and the Anglican Cathedral (Holy Trinity). The Cathedral on Commissioner's Road (now Bogyoke Aung San Street) is visible behind the reviewing stand.