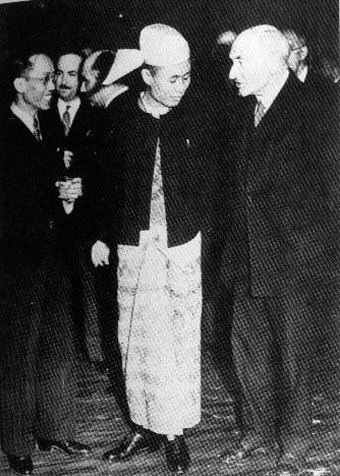 The Aung San - Attlee Agreement which paved the way for Burmese independence less a year later was signed on 27 January 1947. Amongst other things, the agreement included as an objective "the early unification of the Frontier Areas and Ministerial Burma with the free consent of the inhabitants of those areas".

By late 1946 the Clement Attlee government had decided that with the looming independence of India, Burma would soon lose its strategic value on the empire's eastern flank. Furthermore, future profits were more likely to be made in Malaya, Singapore, and Hong Kong than in Burma's war-ruined economy. Local nationalist sentiment was fast rising. Independence for Burma would mean one less responsibility for the UK at a time of major responsibilities elsewhere, including in India, Palestine, and at home. The original plan to rebuild the Burmese economy and stay for at least another ten years (as in Malaya and Singapore) was replaced with this plan for early independence.

This is a well-known photograph, (though am not certain) was taken at the reception at the Dorchester Hotel hosted by General Aung San two days later, showing General Aung San with Lord Frederick Pethick-Lawrence, Secretary of State for India and Burma. General Aung San, just shy of his 32nd birthday, had deeply impressed his British interlocutors, who now addressed him as "Excellency".