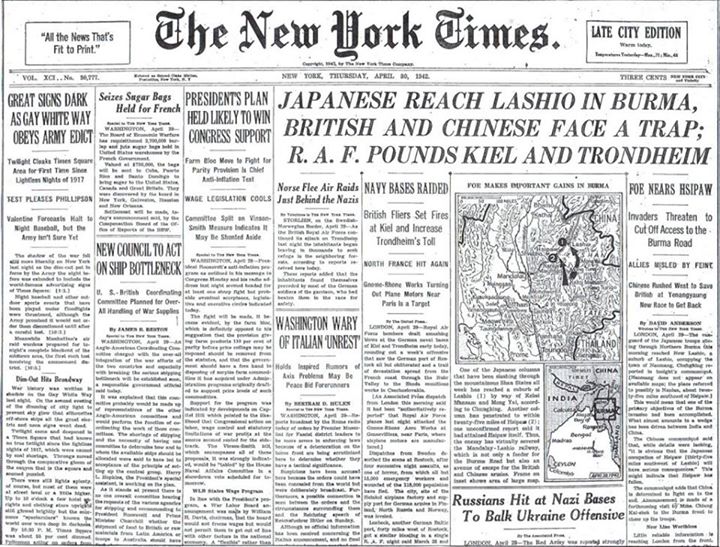 On 29 April 1942, the 56th Division of the Japanese imperial army defeated forces of the Kuomintang's "Chinese Expeditionary Force (Burma)" and seized Lashio. Lashio was burned to the ground during a devastating five hour battle. The Japanese victory effectively cut the "Burma Road, the motorway linking Lashio to Kunming which had been built in 1939 as China's main lifeline to the Allies. The Japanese invasion of Burma had begun four months before. Washington and London asked for help from the Chinese government of Generalissimo Chiang Kai-shek, who responded immediately by sending his best armies including one of his few mechanised divisions - the 200th Division - as part of the Chinese Expeditionary Force (Burma). Rangoon fell in early March. Chinese forces first fought the Japanese at Toungoo from 24-30 March in fierce house-to-house fighting that left the beautiful railway town in ruins. On 11-19 April, the Chinese, together with the (British) 7th Armoured Brigade, rescued 7,000 British and Indian soldiers who had been surrounded at the battle of Yenangyaung. Chiang Kai-shek wanted to make a stand at Mandalay and hold a defensive west to east line from India to Yunnan. But the Japanese were pressing hard with the 18th and 56th divisions arriving to reinforce the 33rd, moving north in three columns, along the Irrawaddy valley, up the Rangoon to Mandalay road and rail line, and in the Shan states, from Taunggyi to Lashio, everywhere outflanking and encircling their enemies. On 24 April, Lt. General Sir Harold Alexander, C-in-C of Allied Land Forces in Burma made the decision to withdraw all men to India. A chaotic retreat followed. 600,000 civilians attempted to walk from Burma to India. 80,000 died. (The exodus included the Burma government led by Sir Paw Tun, but that's another story). After the fall of Lashio the Japanese pushed north and northeast, to Mogok and Myitkyina, and across the present Sino-Myanmar border, before finally stopping at the Salween River in Yunnan, near Baoshan. Their 1,400 kilometer advance over two months was the longest advance by any land force in WW2 (longer than the 1,200 kilometer German advance from Poland to Moscow). The Chinese would not be able to successfully counter-attack until January 1945. China's involvement in Burma in WW2 is not very well known (especially in Myanmar). But it had a decisive effect. The Chinese armies that fought the Japanese undoubtedly prevented a full invasion of Yunnan; the fall of Yunnan may well have precipitated a collapse of the Kuomintang government at Chungking. Instead, fighting in China over the next 3 years pinned down 40 Japanese divisions , Japanese divisions that would not be available elsewhere (e.g. to fight the Americans in the Pacific). Some of Chiang Kai-shek's best divisions were decimated in the Burma fighting. It might be argued that without the losses sustained on the Burma front 1942-5, the Kuomintang might not have been defeated in 1949 by the People's Liberation Army of Mao Zedong. The Burma campaign changed global history. But it is barely taught (outside a very narrow nationalist narrative) and little known in Myanmar itself.