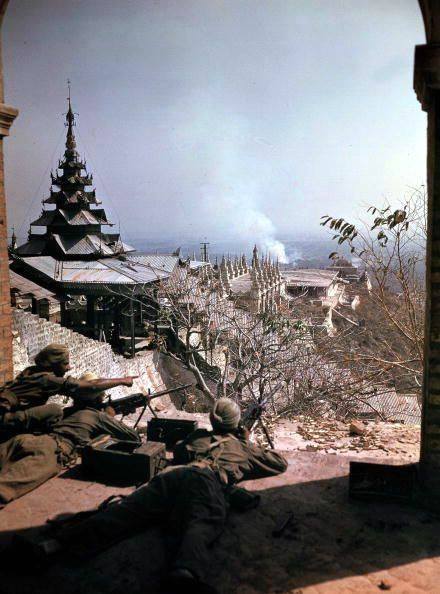 In March 1945, fighting rages on Mandalay Hill between the 19th Indian Division and defending Japanese imperial forces. The 44th Gurkhas had successfully stormed the Hill the night of 8 March, reaching the summit the next morning. But the Japanese had hidden themselves in dozens of concrete tunnels and bunkers. For two days, amongst Buddhist temples and monasteries, the Gurkhas together with Sikhs of the Frontier Force Regiment battled the Japanese, including in hand-to-hand combat. The Battles for Meiktila and Mandalay (which would continue for another ten days) were the decisive battles of WW2 in Burma. The photograph shows men of the 11th Sikh Regiment during the fight for Mandalay Hill, which was seized by a mix of British, Gurkha, Sikh and Punjabi units.