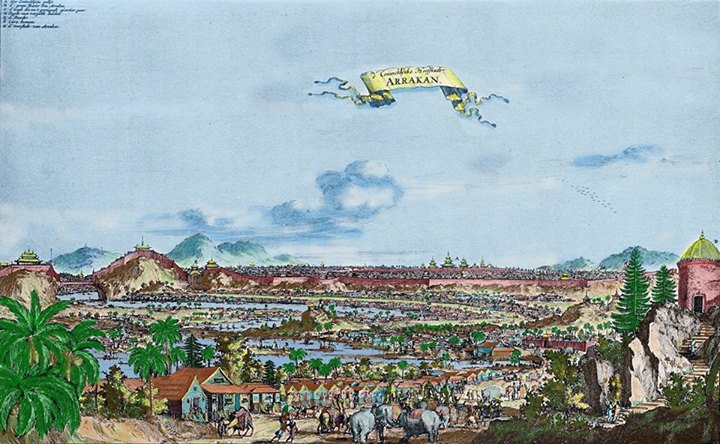 Bayinnaung's invasion of Arakan in 1580

On 9 September 1580: Bayinnaung began a massive invasion of Arakan. The Toungoo realm was then at its greatest extent - reaching from Manipur in the west across all the Shan states to Lanxang (Linzin in Burmese or Vientienne) and Ayutthaya in the east. Only Arakan remained.The invasion was led by Prince Thiri Thudhamma Raza of Martaban and was a joint land and naval expedition that included 24,000 foot, 1,200 horses, 120 elephants, and 1,300 vessels (leaving from Cape Negrais). The Arakan kingdom then under King Min Phalaung was then also at the height of its powers, its dominion stretching to Chittagong and Tripura. Sandoway was easily taken but the invasion force after 12 months turned back after the death of Bayinnaung. Mrauk-U remained independent for more than another two hundred years. The picture is a contemporary Dutch illustration of Mrauk-U. The Dutch Vereenigde Oost-Indische Compagnie had a very close relationship with the Mrauk-U rulers.