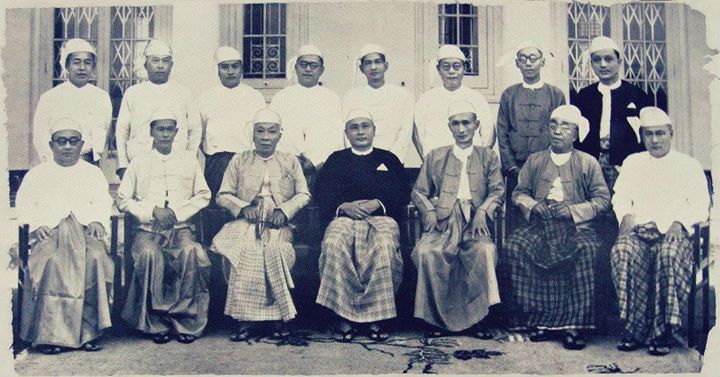 The Burma Translation Society governing council in 1954 including many of the leading writers of the time. Standing (from l to r): U San Htwa, U Ba, U Khin Zaw, U Myo Min, U Thein Han, U Kaung, U Wun, U Thant Sitting (from l to r): Dr Htin Aung, Education Minister U Than Aung, retired Supreme Court Chief Justice Sir Mya Bu, Prime Minister U Nu, Finanace Minister U Tin, Supreme Court Justice U E Maung, U Cho. The semi-official Society's main mission was to make outside knowledge available to the Burmese people. In 1954 they had just published the first volume of the "Encyclopedia Burmanica"; when the book first arrived by ship at the Brooking Street wharf, U Nu and most of the cabinet were there to greet the ship. U Nu believed that the country was suffering from an "ever increasing number of ignoramuses and Mr Zeros" and that only the spread of knowledge and education could make possible genuine development.