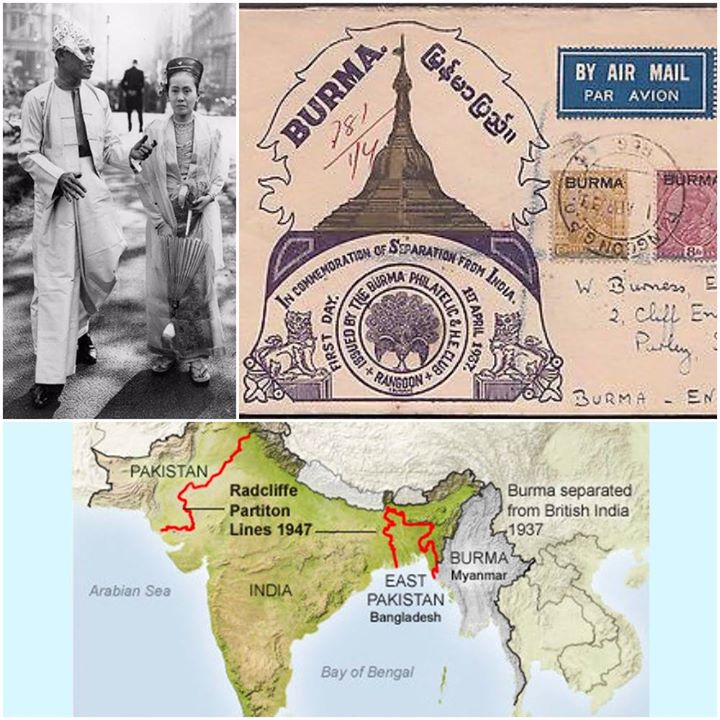 Burma was separated from India

This was arguably the most important single development in 20th century Burmese history. Independence from Britain would almost certainly have taken place one way or another after WW2. But if Burma had not been separated from India in 1937, the politics around independence in the late 1940s or 1950s would have been very different, and intertwined with questions regarding the creation of Pakistan.

The relatively easy partition of 1937 also led London and Delhi civil servants later to assume that the 1947 partition would also not be too difficult, influencing debates on the desireability of Pakistan.  Burma was a province of British India and part of the Bengal Presidency. During the days of the 'dyarchy' constitution in the 1920s the idea of Burma's separation from India was first mooted. In 1930 the Simon Commission (a British parliamentary commission on the future of India) recommended separation.

The British argued that Burma was a separate nation that had "by accident of history" been attached to India "for administrative convenience". The Governor of Burma (1927-32) Sir Charles Innes wrote: that Burma was "a small land wedged between the two great countries of China and India" and asked "Will the Burmans be able to maintain their individuality as a nation and their distinctive characters of civilisation"?

This was something which also worried emerging Burmese public opinion. Anti-Indian and anti-immigrant sentiment was also on the rise, something which would be hugely exacerbated by the economic downturn during the Great Depression. The first anti-Indian riots broke out in 1930, leading to perhaps hundreds killed and thousands injured.

But the rising class of Burmese politicians generally opposed separation. They thought it was a British trick. They knew that the anti-colonial movement in India was picking up steam and were anxious not to be left behind. The 1935 India Act would give India increased powers of self-government and many thought separation meant permanent British rule. Some in Rangoon believed a Burma separate from India would quickly become a dumping ground for unemployed Englishmen of the worst sort and increased exploitation by UK companies.

Many of the Burmese delegates at the Burma Round Table in London in 1931-2 opposed separation.   And the Burma general elections of 1932 proved a decisive win for the anti-Separation parties headed by U Chit Hlaing and Dr Ba Maw.

But the British went ahead anyway and separated Burma from India as part of the India and Burma Act of 1935. Fresh elections were held in 1936 and a new government was appointed under Dr Ba Maw as the first "Premier of Burma" on 1 April 1937.

The images are of Dr Ba Maw and his wife Daw Kinmama Maw in May 1937 at the coronation of King George VI, a commemorative stamp marking separation, and a map showing the two partitions of what had been the British Indian Empire.