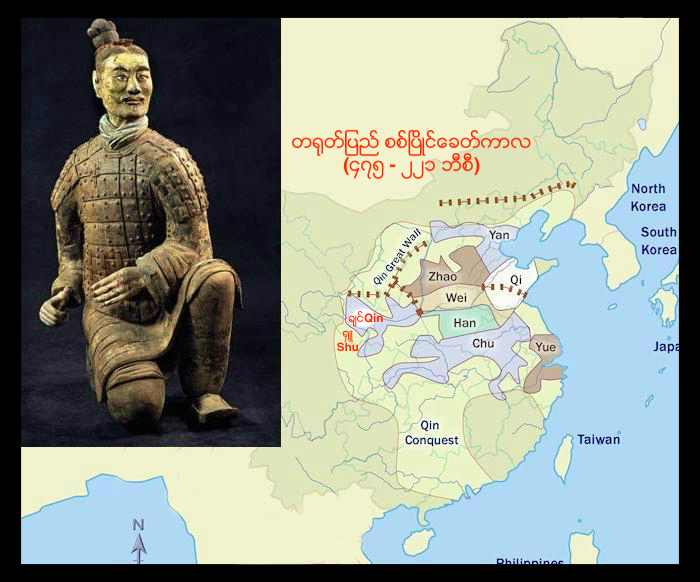 Around the time that Alexander the Great was preparing to conquer the known world, in the 4th century BC, Hui Wen, the king of Qin, was also expanding his domains, laying the basis for an empire that would grow and expand to the present day. This was during China’s ‘Warring States’ period. The country had not yet been unified and Hui Wen’s kingdom was only one of several feudal states that were constantly fighting one another for supremacy. Qin was situated just beyond the Yellow River, a dry and dusty region adjacent to the Gobi Desert. To the south was the kingdom of Shu, located where Sichuan province is today, entirely different in language and customs, as well as rich and fertile. Hui Wen’s main aim was to incorporate his other rivals to the east, but he was convinced by his advisors that by first adding Shu to his domains he would gain the strategic edge he wanted. He needed, however, to come up with a clever plan as there were rugged mountains between the two kingdoms and no road through which to march his armoured crossbow-wielding legions.

He decided on a ruse. Qin already had diplomatic ties with Shu and had sent women to the ruler of Shu to become his concubines. According to Chinese chroniclers, this Shu ruler had also fallen madly in love with a trans woman from the far north and had become distraught when the trans woman died. The Qin court regarded him as a greedy and lecherous clown. There were also rumours of dissension within the Shu regime. For Hui Wen, the turmoil presented an opportunity and he had his men construct statues of cows made of stone and place them in an area of Qin where he knew visiting Shu ambassadors would see them. He also had blocks of gold placed near the statues, so it would seem (said the Chinese annals) that the cows were excreting gold. The plan worked. The ruler of Shu soon heard of the golden cowpats and requested that he be sent a few of those miraculous cows. Hui Wen replied that he will happy to present them as a gift but he would first need to build a special road through the mountains, as the cows were delicate and needed to be transported with care. The Shu accepted. The result was the ‘Stone Cattle Road’, an amazing feat of early engineering, with huge wooden planks laid on top of great vertical beams, bored straight into the mountainside. And as soon as the road was completed, the Qin launched their invasion and permanently annexed the land of Shu. It was a step towards the creation of the first Chinese empire, and a major expansion southwest towards new and alien domains.