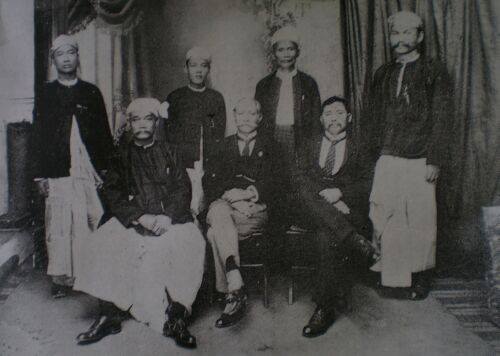 Dr San C. Po, the leading Karen political leader of his time was born near Bassein (Pathein) on 4 October 1870. He travelled to the US at age 14, eventually studying medicine at Albany (and becoming the first "Burmese-American", before returning to Burma and later renouncing his US citizenship to enter Burmese politics). He was a medical doctor and writer, as well as a politician and Karen nationalist, serving for many years in the Legislative Council. He was knighted in 1933 and died in 1946. His daughter Mrs Ba Maung Chain was for many years a minister in the U Nu government. This is a photograph of Dr San C. Po (seated centre) with other Karen Members of the Legislative Council in the 1920s.