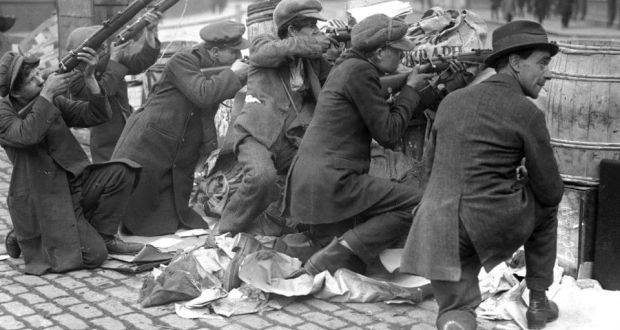 24 April 1916 is the anniversary of the Easter Rising. Though the uprising failed, the Easter Rising in Dublinin 1916 had a profound effect on the whole of the British Empire, not least on Burma, then a province of India. 1916 was a turning point in Burma's history: King Thibaw died that year, sealing the fate of the Konbaung monarchy and the royal establishment that had ruled the country for generations. At the same time, modern nationalist politics was born, inspired by developments in India (and India's Congress Party, about to come under the leadership of Mahatma Gandhi); and by developments in Ireland. The Easter Rising captured the imagination of colonial peoples around the world, including in Rangoon. The proclamation of the Irish republic in 1919, the war against the British that followed, the Anglo-Irish Treaty and the establishment of the Irish Free State in 1921 - were all followed with intense interest by the Burmese. The new generation of modern political leaders like U May Oung, U Ba Pe, and U Chit Hlaing looked to Ireland as an example, in their demands for immediate "Home Rule" and a "Burma Free State". The writings of the Irish nationalist party Sinn Fein were routinely translated into Burmese. "Sinn Fein" means "We Ourselves", not unlike "Do Bama" in Burmese. The Dobama flag (now the basis for the Myanmar national flag) was based on the Irish tricolour. In the 1920s many Burmese were impatient with the path of gradual constitutional reform set out by Delhi and London and saw in Ireland an example of radical and if necessary violent change. U Aung San was sometimes later referred to as the "Michael Collins of Burma", after the Irish revolutionary leader who was assassinated in 1922. Burma like Ireland formally left the Commonwealth in 1948, two of only a very few former British possessions to ever leave the Commonwealth. The images are of the Easter Rising.