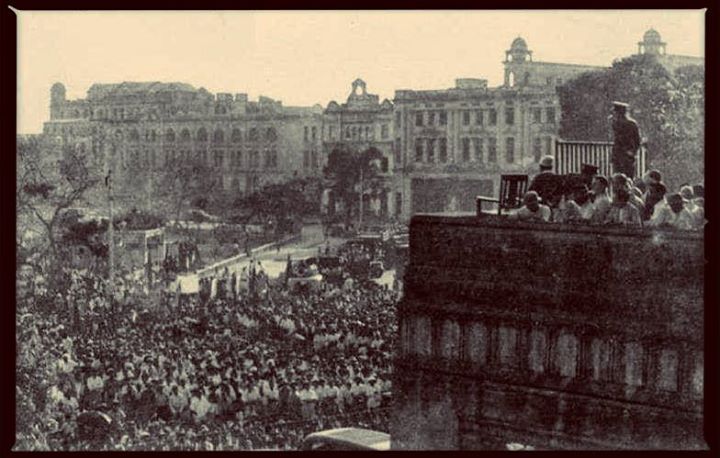 On 13 July 1947, U Aung San gave his last speech from the balcony of City Hall to supporters in Fytche Square (now Maha Bandula Park). He was then the de facto head of an Interim government (formally the Counsellor for Defense and External Affairs and deputy chairman of the Executive Council) under the Governor Sir Hubert Rance. U Aung San and nearly his entire Executive Council would be killed less than a week after this speech, depriving Burma of leadership at this most crucial moment.

As agreed earlier in the year between U Aung San and the UK Clement Attlee government, elections had been held in April 1947 to a Constituent Assembly that would decide the future of Burma.  The Panglong Conference of February 1947 had given the formal assent of the Frontier Areas to unify with Ministerial Burma under specific terms. No final decision though had yet been made as to whether or not would opt for Dominion status within the Commonwealth (as India).

In his speech, he urged Burmese to be more disciplined in the face of challenges ahead.

There is a myth that Burma at independence was all set for a bright future.  Nothing could be further from the truth.  The country in 1947 was in economic ruins, with nearly all its infrastructure destroyed in World War Two, already in the grip of multiple armed rebellions, including by communist militia and the pro-Pakistan Mujahideen in north Arakan (now Rakhine State).

And the world was again becoming an uncertain place.  In China, the communists had just seized the northeast and were preparing for final victory against Chiang Kai-shek.  In Europe, the the Cold War was looming, with the Soviets rejecting participation in the Marshall Plan.  In India, the British had just agreed to partition and the creation of an independent Pakistan, uprooting millions of people.  Indonesia was in the middle of a bloody fight for independence, Palestine was mired in rising violence, and in Vietnam Ho Chi Minh Viet Minh were battling the French colonialists.

Burma was in bad shape, but no more than the rest of Asia.  Over the next 70 years though, as nearly all Asia moved from strength to strength and most of its people enjoyed peace and ever greater prosperity, Burma would be left behind.