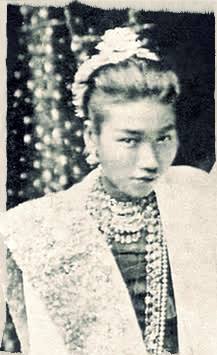 HM Queen Supayalat (13 December 1859-24 November 1925) was the Last Queen of Burma. She became the "Middle Palace Queen" of King Thibaw in 1916 at the age of 19. During her seven years on the throne she fought attempts by reformist ministers to curtail royal authority (especially royal spending). She also fought to limit the number of queens and royal concubines. British propaganda portrayed her as a decadent tyrant, dominating her husband and opposed to all change. Negative images of the king and queen were usually linked to calls for military intervention and annexation. (King Thibaw for example was portrayed as an ""gin-soaked"" alcoholic, whereas he in fact he almost certainly never drank alcohol at all.) She was 26 years old and pregnant with her third daughter at the time of the Third Anglo-Burmese War. She lived in Ratnagiri in India from 1885-1919 and then was allowed to return to Burma, living on Churchill Road in Rangoon (now Komin Kochin Road) until her death in 1925. She is buried near the foot of the Shwedagon Pagoda. Her house on Komin Kochin road was demolished by developers a few years ago.