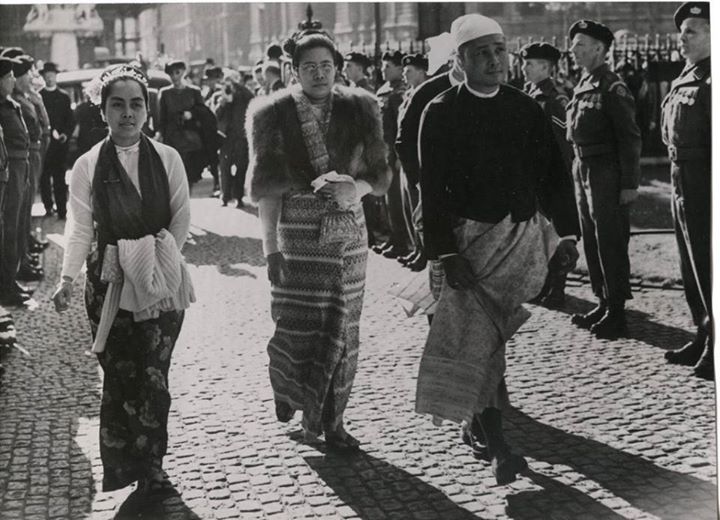 In May 1950, Prime Minister U Nu in England, accompanied by his wife Daw Mya Yee and General Aung San's widow Daw Khin Kyi. During his days in London, Oxford, and elsewhere, U Nu tried hard to paint as rosy a picture as possible of the situation in Burma. He said peace was likely 'within a year' and encouraged British aid and investment. An article in the Spectator magazine (link below) however painted a very different (and more realistic) picture. Rebel forces then controlled much of the country and just a year before had come within striking distance of Rangoon. Hundreds of thousands of people had been displaced by the fighting. Economic life was paralyzed, with the equivalent (in today's money) of billions of dollars of property destroyed over 1948-50 (on top of the massive devastations of WW2). And private companies, disheartened by what they saw as rising anti-business sentiment and poorly conceived government policies, began looking for opportunities elsewhere in Asia. The Spectator's Sir Percival Griffiths (a former Indian Civil Servant) wrote: "The politicians who form the Burma Government today are nearly all men with no practical experience of any kind behind them and, perhaps, for this reason, they do not realize how appallingly bad the administration is, even in those areas where the power of government is unchallenged." Sir Percival concluded however that " In spite of all this, most outside observers regard the present Government as better than any available alternative." http://archive.spectator.co.uk/article/26th-may-1950/6/realities-in-burma