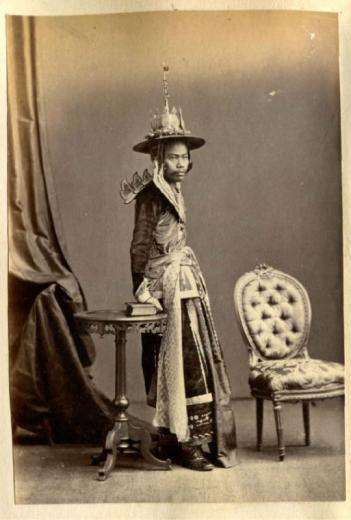 A rare portrait of the "Thangyet Wun" U Myu (later styled Mingyi Minhla Maha Sithu Kyaw). U Myu was a scion of an old family of Ava nobility and was one of the first Burmese to be educated in Paris, obtaining a degree in engineering at the the École Centrale des Arts et Manufactures in 1868 and returning for further study in France in the 1870s. He held different posts in Mandalay, leading King Mindon's efforts to build the country's first factories, but his main contribution was as a diplomat. He assisted the Kinwun's historic tour of Europe in 1872 and was part of diplomatic missions to Calcutta in 1875 and Simla in 1881. King Thibaw appointed him Burma's first ambassador to Paris in 1885, only months before the fall of the kingdom. During the two weeks before the fall of Mandalay, he tried desperately to rally diplomatic support from other European powers. Though the French had signed a treaty of friendship, in the end they did nothing to help. With the monarchy overthrown, U Myu was left stranded in Paris together with his staff and 22 Burmese state scholars, but eventually returned and received a small pension. He died in 1905 aged 62. Like so many of his generation who were educated in Europe, British rule meant his career was suddenly cut short and that he was denied the chance to make his full contribution to his country. This photograph was taken in 1875 during the Calcutta mission led by the Kinwun. U Myu was then 32 and just returned from France.