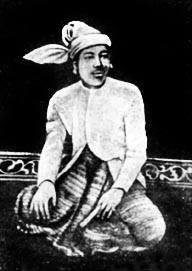 The assassination of the Prince of Kanaung

In August 1866 the course of Burmese history changed forever with the assassination of the Prince of Kanaung (in the photograph).The Kanaung Prince was the younger brother and partner in government of King Mindon. He was also the Crown Prince. Together they set out to transform government, develop the economy, and defend the country's independence.

Under the Kanaung Prince's direction, dozens of students were sent to Europe, to study science and engineering and for military training; the army was overhauled; modern factories, including for arms and ammunition, iron-works, and glassware, were built; a telegraph line was established; and ten steamships were imported from England for a new state-run transport system. One of the world's first oil industries was started. High tariffs protected local industries. The state also organized the production and export of cotton to take advantage of high global prices, the result of the US Civil War. These and other state-directed exports financed the country's modernization.

As importantly, the entire fiscal and administration basis of government was reviewed and fundamental reforms begun, on issues from agricultural taxation to bureaucratic organisation.

It was a modernization programme that preceded what would be tried elsewhere, in Japan, Siam, Egypt, Vietnam.

At around noon on 2 August 1866 the 46 year old Prince of Kanaung, together with ministers and secretaries, were killed by men loyal to his nephew (the Prince of Myingun). Civil war then broke out between loyalist forces under the king and rival princely factions. After weeks of savage fighting up and down the Irrawaddy King Mindon was eventually able to overcome his opponents, but his reform programme had been critically weakened. The king himself was never the same and he never again appointed a new crown prince. The princes responsible for the rebellion were motivated by anger (from past slights), a desire for power, and a feeling they could do better. No one was actually against the reforms.

In 1867, taking advantage of internal strife, the British forced the Burmese government to sign a commercial treaty. The treaty, amongst other things, lowered tariffs and ended state involvement in the economy. Also over the late 1860s, the Taiping and Panthay rebellions to the northeast made impossible the development of trade with China. Both of these things together led to a severe fiscal crisis. By the mid-1870s very little of the original development programme was left.

Outside factors - British imperialism and instability in China, were important in undermining prince Kanaung and king Mindon's development programme. But in the end it was intra-elite rivalries - the inability of Burmese leaders to come together at a time of crisis - that doomed the country.