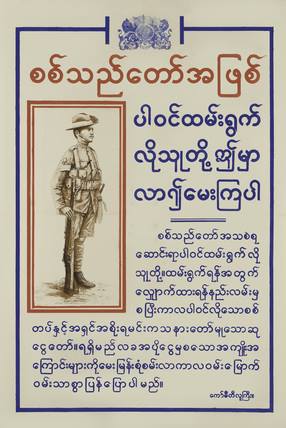 A Burma Rifles recruiting poster, probably from 1940. The Burma Rifles were created in 1917 as a regiment of the Indian Army and served in Egypt, Palestine, and Mesopotamia during the Great War. Though Burmans were barred from 1927-1940, by 1942 the 14 battalions of Burma Rifles included Burmans as well as Karens, Kachins, Chins, Shans, Gurkhas, Sikhs and Punjabi Muslims (from Burma). All except the 2nd Battalion disintegrated during the Japanese invasion. This 2nd Battalion (Karens, Kachins, Chins mainly) went on to play an important role in the Allied reconquest of 1943-45. The Chindt Commander (and father of modern special forces operations) General Orde Wingate wrote that "I have never had under my command in the field as good a body of men as the 2nd Burma Rifles."