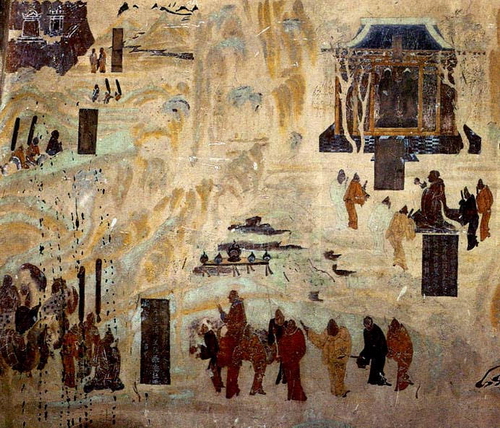 The first attempt at a China Myanmar Economic Corridor

In 122 BC, a special mission was dispatched by the emperor of China, a mission to find a rumoured southwest passage, one that was said to lead from his Middle Kingdom to the only recently discovered land of India and from India to the unfamiliar countries beyond.

A few years before, the explorer Zhang Qian had arrived back at the imperial court after a long and arduous journey along an already known northern route, reaching the limits of the known world. He had spent years in captivity at the hands of China’s mortal enemies, the Xiongnu barbarians, before venturing across vast deserts and wastelands, to strange and outlandish places. He described the Fergana valley and the oasis towns along what would one day be known as the Silk Road, as well as his travels onwards to Bactria, in what is today Afghanistan, and which was then part of a flourishing Greek and Buddhist civilization. And he told of mysterious realms even further afield, like Persia and Mesopotamia, as well as ‘Shendu’ or India, a region ‘hot and damp’ where ‘the inhabitants ride elephants when they go into battle’. These were kingdoms with their own cities and systems of writing and merchants who sailed the ocean.

And Zhang the explorer told them something even more astonishing: in the markets of Bactria, he had noticed merchandise – cloth and bamboo sticks – that had been made in Chinese province of Shu. Shu is modern Sichuan, and in the extreme southwest of what was ancient China. Had other Chinese come this way before him? No, he was told, the products from Shu had come via India. It was a revelation and could only mean one thing: that there existed a southwesterly route, from China to the Indian world.

The existing northern way was treacherous and skirted the territory of the Xiongnu, fierce nomads who spoke a language akin to modern Turkish and Mongolian. Not long before, these nomads had defeated their rivals, called the Yuezhi, slaughtered the Yuezhi king and made his skull into a cup. A southwest passage would be a way around this menace. And direct contact with India could mean a grand alliance between China and India against the barbarians in between.

The expedition would not be a great success, however. The imperial envoys started off in Shu or Sichuan, and then travelled south over many months, up great cliffs, and through narrow forest trails, braving tigers and giant snakes. Emperor Wu’s Han dynasty ruled what is today eastern China and even held sway over much of modern Vietnam and Korea. The Pacific coastline was well known. But now they were deep in the interior, surrounded by alien tribes and uncertain how far Indian would be.

After first crossing the kingdom of Yelang, on the very margins of Chinese civilization, the envoys pushed further south, finally reaching the kingdom of Dian, in what is today the province of Yunnan, near Burma, and until then unknown to the Imperial court. The king of Dian treated the envoys well but told them that their way onwards is blocked by another people, called the Kumming. They were forbidden to proceed. Quite possibly, the wily king of Dian wanted to protect his own commercial monopoly and the already thriving regional trade in everything from cowry shells to rhinoceros horns. He did, however, provide his visitors with additional information and told them that some thousand li further to the west there was yet another kingdom, called Dianyue, whose people rode elephants and where merchants from Shu sometimes went secretly to trade.

The emperor’s original desire had been to open direct relations with India, and to outflank the Xiongnu by finding another route to the west. In this, he would fail. But in making contact with the kingdom of Dian, he began a millennia-long process that would finally bring China, by the end of the twentieth century, to the very borders of Burma, and bring the ancient dream of a direct passage to India within reach.