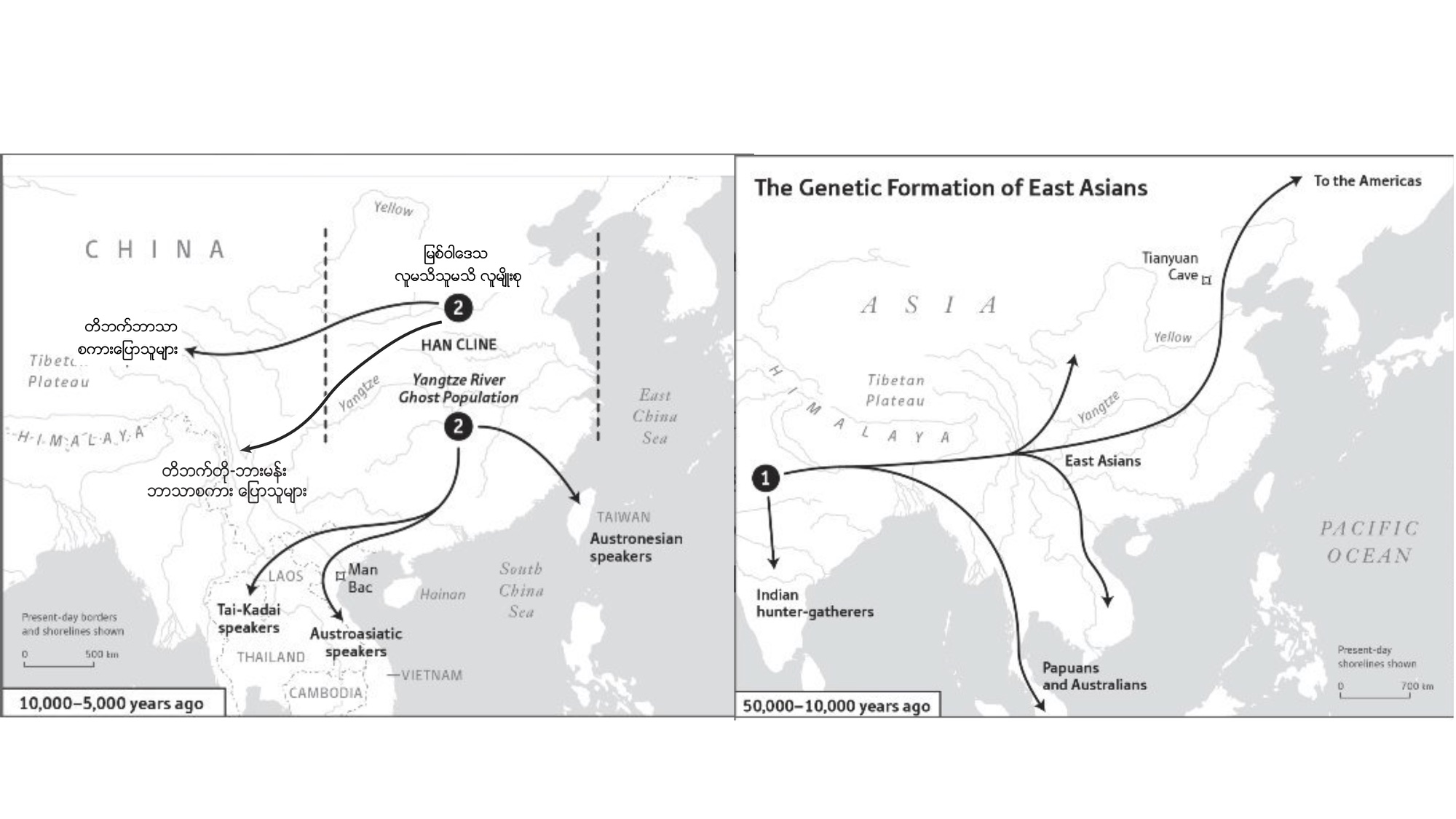 The genetic history of the Burmese people

Over the past 4-5 years there has been a revolution in genetic science. Scientists are now able to unlock new information about humanity's distant past in a way that was impossible until very recently. Over the next 5-10 years, much more information might be uncovered about the genetic history of Myanmar than today. This is a summary of what seems to be known so far:

(Note: "Burmese" refers to the ethnic majority Burmese-speaking people of the Irrawaddy valley.)

These first modern humans left Africa probably in two waves:  around 120,000 BP and 60,000 BP. All people in Europe, Asia and America, are descended from the second wave.

At that time, Europe and Asia were home to not just modern humans but other related species as well: Neanderthals in Europe, Denisovans in Asia, maybe Homo Erectus in Indonesia, and Hobbits in Indonesia.

Sea levels were then much lower than today. Most of what is today southeast Asia was one region, all connected by land. It's called "Sundaland" and by 20,000 BP may have been one of the most populous places in the world.

From 60,000-10,000 BP Myanmar was inhabited by small groups of hunter-gatherers, probably similar to other groups in Sundaland. No one knows what they looked like. It is important to remember though that until 5-10,000 BP people in different parts of the world may have looked entirely different than today.

From Sundaland, people migrated north to what is now China and then onwards to Siberia, east to America, and west to Europe.

In 10,000 BP, the Ice Age ended, dramatically changing climate conditions across Europe and Asia. Myanmar was connected to the Andaman Islands by a land bridge which flooded at this time. The people on the Andaman Islands today are descended from hunter-gatherers who lived in Myanmar and were then trapped when this bridge flooded.

The Yellow River ghost population may have spoken a language ancestral to Burmese, Tibetan, and Chinese.

The Yangtze River 'ghost' population - who were the first rice farmers - moved south around 4,000 BP and mixed with southeast Asian hunter-gatherers.  Most southeast Asians, are the result of this mix.

Around 2,000 BP a third group arrived:  bronze age people (mainly men) speaking Tibeto-Burman languages.  Tibeto-Burman is a language family that includes Burmese and Tibetan.  They were probably genetically close to Tibetans and the Yellow River Ghost population. These bronze-age migrants then mixed with the groups already there.   One Tibeto-Burman language, Pyu, became dominant in most of the Irrawaddy valley.

Then around 1000 BP came an additional element: the Burmese language. Burmese is part of the Yi-Burmese subgroup of the Tibeto-Burman language family. It is related to Tibetan. It is much more closely related to Yi, spoken today in western Yunnan and southern Sichuan.  Lisu is an Yi language. The exact relationship with Pyu is not clear.

At the same time, there was mixing with the Austroasiastic populations in the area. They were descendants of the mix between the Yangtze River ghost population and southeast Asian hunter-gatherers.Today there are Austroasiatic people both to the east of Myanmar (Cambodians and Vietnamese) and west (the Munda in India). The Mon and Palaung also speak Austroasiatic languages.

This suggests that Austroasiatic languages were more widespread before being displaced by bronze-age Tibeto-Burmans in some areas.

There was also mixing with people coming eastward from India, either by land from Bengal or by sea from South India, around 1,500 - 500 years ago. Bengalis today are themselves also mixed with bronze-age Tibeto-Burmans.

So to summarize, the Burmese are a mix of three main groups:  the original southeast Asian hunter-gathers, the Yellow-River ghost population, and a later wave of bronze age Tibeto-Burman speakers, plus latter mixing with Austroasiatic speakers (mainly Mon) and people from India.

Different groups in Myanmar today are probably different mixes of these populations.

Of course, individual people who are today Burmese may have many other mixes as well.  But this is what is known so far of the genetic history of the majority of people.