Mindon is remembered by many Burmese as their last great king and among the most devout patrons of Buddhism ever. He convened the Fifth Great Buddhist Synod in 1871, which was billed as the first of its kind in twenty centuries, bringing together twenty-four hundred monks, including several from overseas, in a grand attempt to review and purify the scriptures. Nor was his religious interest limited to Buddhism. He patronized the Islamic community in Mandalay, building a mosque and even a guesthouse at Mecca for the convenience of Burmese Muslim pilgrims, and he even allowed Dr. Marks to build an Anglican mission school right outside of the walls of the palace at Mandalay.

But what is nearly never appreciated nor even remembered at all are Mindon’s political reforms, his attempt to refashion government and help his country modernize in the face of continuing British Indian expansion. They are not remembered largely because they failed in the end, lost with the conquest of General Prendergast and the titanic political and social changes that followed the British invasion of 1885. But they were important nonetheless, deeply affecting the very fabric of Burmese society in the late nineteenth century and creating the context within which British colonial rule developed.

Mindon worked closely with his half brother the Kanaung Prince, and the two divided up between them the main areas of government, with Kanaung specializing in areas of military and administrative reform. It was almost a joint kingship, and Kanaung was designated heir apparent, to the deep chagrin of Mindon’s elder sons, with a lavish personal court rivaling that of the king himself. Mindon’s chief queen was also an important influence. She was his cousin, from a more senior branch of the royal family, and was well known for both her interest in science and astrology – learning to use an English nautical almanac for her calculations – and for her uncontested dominance over the hundreds of other royal women.

As an important part of their reform drive, Mindon and Kanaung arranged for dozens of young Burmese men, mainly sons of court officials, to be sent abroad for their education. Some went nearby to schools and universities in India, but a good number went farther afield, to Italy, France and Germany. By the late 1870s several in the upper echelons of the Court of Ava were foreign-trained, and they would all become part of the final and ill-fated push for modernization.

The army was also strengthened and reorganized. Factories were set up and began producing rifles and ammunition to replace the antiquated muskets still in use. Steamships were also imported, ten in all, and though they were meant for regular transportation, they came to play a critical role in maintaining internal security. Much more important, the system by which families provided men and officers on a hereditary basis into the army was dismantled, and instead a proper standing force was set up. For centuries the same families, proud of their martial tradition, had supplied Ava’s troops, and this connection to the crown had been a pivotal source of their status in their own rural communities. This was now undone.

In 1870 a telegraph line was laid linking Mandalay to Rangoon as well as to other towns in Upper Burma, and a system of Burmese Morse code was invented. Western books on chemistry, physics, and biology were eagerly sought, and plans were made to translate the entire Encyclopaedia Brittanica. Ambitious schemes and generous amounts of silver were poured into new industries, with factories producing everything from glassware to textiles, and though these were never economically viable, they were meant to show that a new Burma was being born just outside the ocher-colored ramparts of Mandalay.

At the same time, the business of government itself was refashioned, changing the workings of political power and, in the process, undermining (as with the ending of the crown service system) the very basis of social organization in the Irrawaddy Valley that had existed for hundreds of years. Administration was centralized and made more systematic, old royal agencies were abolished and new ones created, and an entirely new system for financing government was devised and implemented, replacing the traditional and often haphazard arrangements that had grown up organically over the centuries. The idea was that to be modern, there had to be uniformity, definite lines of authority, and clear boundaries of jurisdiction. These were things that had never existed before. The power of the hereditary gentry, the old clans whose influence over their townships had held sway since long before the present dynasty, was now diminished against the influence of Mandalay and its appointed agents. For as long as anyone could remember, members of the royal family and nobility had received towns or villages as their appendage, drawing their income from the income of these places (and thus known as the town’s myozas or “eaters”). Now they would receive a salary instead, severing their links with the countryside. And a new tax was set up, meant to replace all existing (and again haphazard) taxes and fees. It was a revolution in the system of government and soon threw Upper Burma’s society into disarray.

Like Egypt, much of Burma’s modernization was to be financed by the cotton trade. Now without the fertile delta, the areas that made up Mandalay’s reduced kingdom rarely had a rice surplus, and Mindon realized early on that cotton was the one cash crop that could be encouraged and sold abroad, both to China and overseas, and that this could keep his coffers full. For a while it worked, and in the 1860s as the American Civil War and the Union blockade of Confederate ports drove up world cotton prices, Mindon’s brokers were able to make a handsome profit. For a while times were good. Burma was not at the very head of the pack, but it was certainly not behind.

First image is King Mindon making a donation at Mahamuni. Second is a sketch by the Scottish Orientalist Sir Henry Yule, made hastily during an audience with Mindon in 1855.

(Adapted from ‘The River of Lost Footsteps’ by Thant Myint-U) 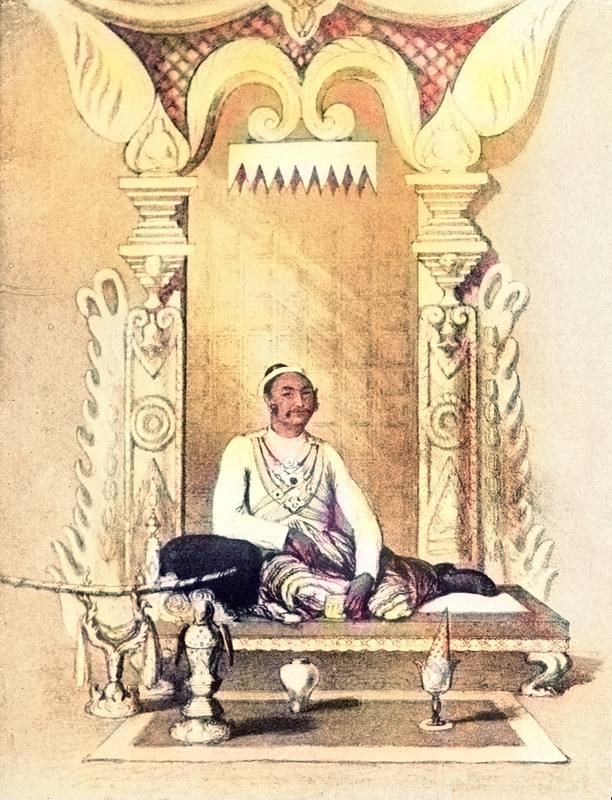