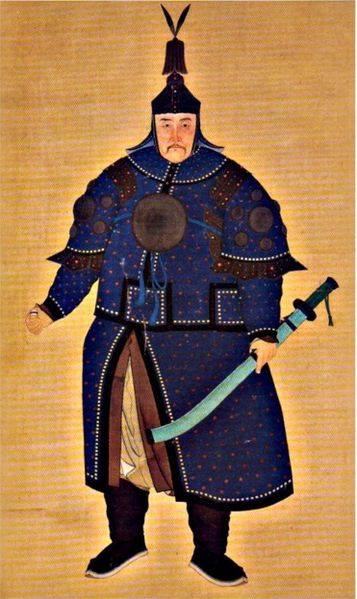 The Treaty of Kaungton was signed on 22 December 1769 and thus, ending the Sino-Burmese War (1765-22 December 1769). Burmese forces had sucessfully resisted four Qing (Manchu) invasions, including a massive 4th invasion of over 60,000, aimed at the annexation of Burma by the Emperor Qianlong. It was the Qing Empire's greatest defeat.The Qing armies included elite Bannermen - Manchus and Mongols as well as Han Chinese - brought down from the Russian border. The Burmese side was led by General Maha Thiha Thura and included the Frenchman Pierre de Millard, a captain of the king's artillery. The portrait is of Mingrui (明瑞), son-in-law of the Emperor and Governor-General of Yunnan and Guizhou, who led the almost successful 3rd invasion. His army reached Maymyo before being decimated by Burmese defenders. He committed suicide. Interestingly, though Burma was never annexed by the Qing, over the 19th century many Burmese men began wearing the Manchu cavalry jacket (马褂) or 'taik-pon' (တိုက်ပုံ) in Burmese.