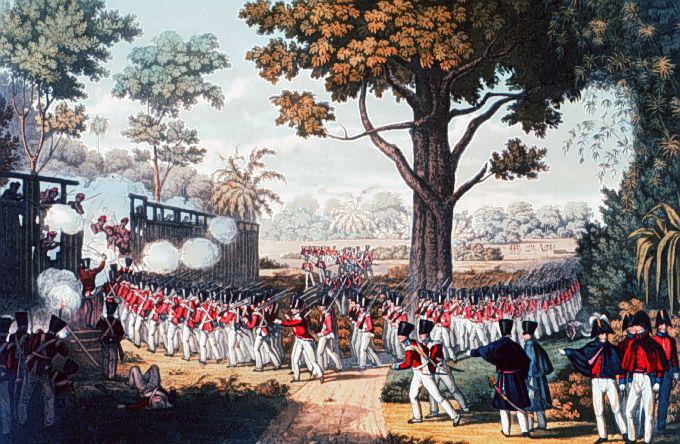 24 February is a black letter day in Burmese history. The Treaty of Yandabo was signed on 24 February 1826 by Sir Archibald Campbell, representing the East India Company and Maha Minhla Kyawhtin, the Myoza of Legaing, ending the First Anglo-Burmese War. The war had begun with aggression on both sides. By 1826 however, the king's forces had been utterly defeated. 15,000 British and Indian troops and tens of thousands of Burmese were dead. Hundreds of Burmese and Shan princes and noblemen had been killed, including nearly all the top generals. The Burmese were forced to surrender or end any interference in Assam, Cachar (Ekkabat), Jaintia, Manipur, Arakan, and the Tenasserim. In addition, the Court of Ava were required to pay (in instalments) one million pounds sterling. This was a staggering amount of money in 1826. The indemnity effectively bankrupted the Burmese state and would cripple the economy for decades. The war also ruined the East India's Company's finances and set the stage for seizure of Lower Burma in 1852 and the final annexation of the kingdom in 1885. The picture shows the British assault on Kemmendine in 1824.