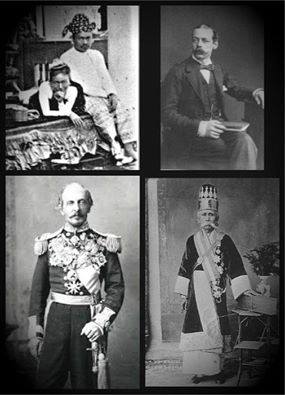 The ultimatum that led to war

On 22 October 1885 Lord Dufferin the Viceroy of India issued an ultimatum calling on the government of King Thibaw to place its foreign relations under the permanent control of the British Indian Empire. Resolution of a dispute with the Bombay-Burmah Trading Company was the formal aim of the ultimatum but the real intent was to permanently end Burmese sovereignty. The British were increasingly worried about prospect of closer Franco-Burmese relations and attracted to the idea of Burma as a 'back door' to China. An independent Burmese kingdom was increasingly seen as an unnecessary nuisance. The deadline was 10 November. Contrary to British propaganda, the Burmese government at the time under King Thibaw had been working hard to modernize the country, undertaking major constitutional, administrative, fiscal and other reforms. Rebellions against increased taxes had, however, severely weakened the administration. The man pushing hardest for the annexation of Burma was Lord Randolph Churchill (father of Winston), then Secretary of State for India. The UK was about to hold elections and Churchill, a Conservative politician, hoped the overthrow of King Thibaw and the annexation of Burma would prove a decisive vote-winner. The Burmese immediately began emergency discussions on how to respond. The British in Calcutta, Madras and Rangoon began preparing for war. The photographs are of King Thibaw and Queen Supayalat, Lord Randolph Churchill, the Kinwun Mingyi (then Chief Minister), and Lord Dufferin (Viceroy of India, after the war to be made the Marquess of "Dufferin and Ava".