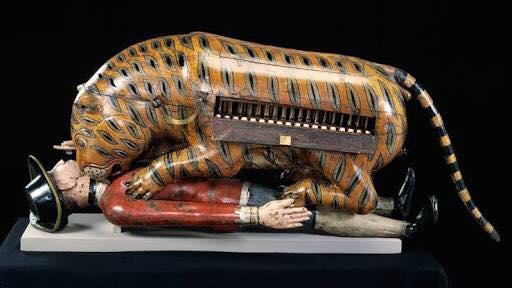 “Tipu’s Tiger”, now at the Victoria and Albert Museum in London. The “Tiger” is a wooden mechanical device. When an organ in the back is turned the European soldier’s arms move and he makes a groaning noise. The device was made for the Tipu Sultan, the ruler of the powerful Mysore kingdom (in South India) from 1782 to 1799. The Tipu Sultan was a great enemy of the (British) East India Company, who fought three wars against him. When he was finally defeated and his capital overrun, the British found this device in his palace. (The Tipu Sultan was also the first to use iron-cast rockets in battle. These were copied by the British and used in the First Anglo-Burmese War)