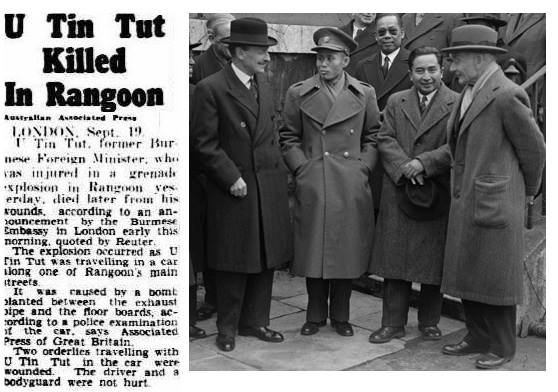 U Tin Tut, one of the most important figures in modern Burmese history

U Tin Tut, one of the most important figures in modern Burmese history, was born on 1 February 1895. He was educated at Dulwich and Queen’s College Cambridge. A star rugby player (he captained his college team), he was after Cambridge called to the English bar and became as well a King’s Commissioned officer in the (British) Indian army. He was also the very first Burmese to join the hallowed ranks of the elite Indian Civil Service.Over the 1920s and 1930s he rose steadily through the ranks of the Indian Civil Service, serving in various departments in Rangoon as well as in districts across Burma. In a reflection of the deep racism in colonial society at the time, even though he was allowed to play rugby at the Rangoon Gymkhana, he was not allowed to use the showers afterwards. During the war, U Tin Tut served the Burma Government in Exile in Simla, headed by Sir Paw Tun. He was also a staunch nationalist and after the war became a close ally of General Aung San. As the only Burmese well-versed in both constitutional and financial affairs, he was indispensible in the negotiations leading to the Aung San – Attlee Agreement of 1947. He was also a key figure behind the “Panglong” Agreement of 1947. By the summer of 1947 he was Finance Minister in the interim government and then the first Foreign Minister of independent Burma. He resigned his position as Foreign Minister in 1948 to become Inspector General of the new “Union Auxillary Force”, meant to counter communists and other ‘leftists’ inside and outside the army. He was a nationalist but not a socialist and wanted friendly relations with the West. On 18 September 1948 U Tin Tut was mortally wounded when a bomb exploded in his car on Sparks Street (now Bo Aung Kyaw Street). He died the next day. His killer is still unknown. U Tin Tut was perhaps the brightest of his generation and would have been a great asset in independent Burma. No one has ever been charged for the murder.