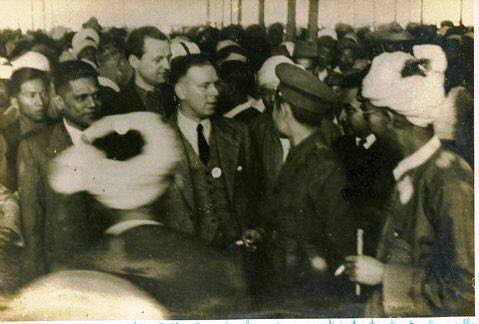 The Panglong Agreement itself was primarily an agreement on transitional arrangements in the lead up to Burmese independence after WW2. Of its nine paragraphs, four deal exclusively with the new position of "Counsellor to the Governor to deal with Frontier Areas" and the relationship of this person to the interim Executive Council.

It also however included three forward-looking provisions: the creation of a Kachin State; "full autonomy in self administration" for the Frontier areas "in principle", and acceptance of the full "democratic" rights and privileges of the people living in the Frontier areas (which were then mainly under the rule of hereditary chiefs).

In this way, what was first and foremost a mechanism for the British to withdraw from Burma gave birth to new aspirations that remain violently contested to this day.

After WW2, U Aung San had led the Burma delegation to London in January 1947 to negotiate the country's independence from Britain. He was very ably assisted by ICS U Tin Tut. The British side was represented principally by the Labour politician Sir Stafford Cripps and the Secretary of State for Burma Lord Listowel.

The main topic of discussion in London was no longer independence (which had already been accepted by the UK Labour government) but the exact shape of the transition, whether Burma would remain part of the Commonwealth, and the future of the so-called "Scheduled Areas" or "Frontier Areas" and of "minority races" more generally. (The "Frontier Areas" were primarily the Chin, Kachin, and Karen Hills, and the Shan and Karenni States)

U Aung San and other AFPFL leaders were aware of the growing certainty of partition in India (and the creation of Pakistan) and were worried this would set a precedent for Burma. And the British were concerned about the possible spillover effects of the civil war in China and the incipient war in Indochina; instability in Burma could, they feared, lead quickly to a communist takeover.

The UK government, with the new Cold War looming large, and with their attention focused firmly on the far weightier issues of the day, in Greece, Palestine, India, and at home, argued at the London talks that these "frontier areas" would need to be strongly welded to the new Burma.

It was a complete reversal of long-standing colonial policy and the implicit promises made to Kachin and Karen resistance fighters during the war.

The resulting Aung San - Attlee Agreement signed on 27 January 1947 stated that the Frontier Areas would necessarily be part of independent Burma, but also stated that this would be based on the "free consent" of its peoples. A "Committee of Enquiry" would be established on how a new constitution could include both Burma proper and the Frontier Areas.

Back in Burma, the Yawnghwe Saopha Sao Shwe Thaik had organized a “first” conference for Burmese, Shan, and other leaders at Panglong, Southern Shan state, in March 1946. The 'second' Panglong conference was now organized by the Shan saophas. The invited 'guests' included the Governor, more than thirty top Burmese political leaders including U Aung San, the Karenni chiefs, Kachin and Chin representatives, and even representatives of the US, Chinese, and India governments.

Karen leaders did not attend as they were still hoping for a better deal from the British; their non-participation was perhaps the single biggest weakness of the conference.

For the British, the future of the "frontier areas" was a final issue to be managed; it would not be allowed to become a problem in London's path to quitting Burma.

ICS U Tin Tut, Burma's only real expert on both financial and constitutional matters was a driving force at the conference. General Aung San himself showed considerable broad-mindedness and a desire to meet the expectations of the minority leaders. But the shadow of India and the approaching partition was all around.

The British representative was the Labour politician Sir Arthur Bottomley, assisted by constitutional expert Eric Machtig, years later UK Ambassador to Finland, who upset the Governor by always wearing khaki shorts with pink socks. U Tin Tut had played Rugby against Eric Machtig when both were at school in England and got along well.

This photograph shows General Aung San shaking hands with Arthur Bottomley (then a Labour politician and Parliamentary Under-Secretary of State for Dominion Affairs). General Aung San underscored to Bottomley the impact India's looming Partition was having on Burma and the Panglong talks. Behind Bottomley is Eric Mastig.