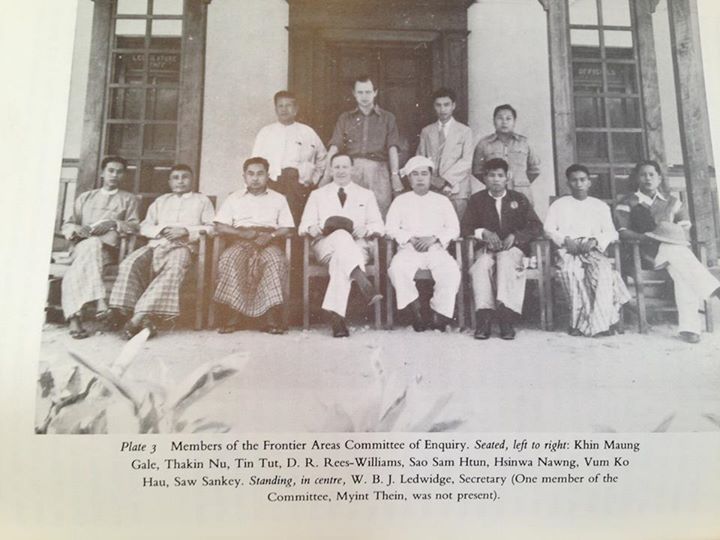 From 23 December 1941 until today, Myanmar has known no war for only 31 months - from August 1945 when the Japanese surrendered to the Allies to March 1948 when the Communist insurrection began. It is impossible to understand future options in Myanmar without first appreciating the legacies of more than 70 years of armed fighting. This is a photograph of the 1947 Frontier Areas Committee of Enquiry that attempted to find a peaceful solution to the integration of Burma's "Frontier Areas" and what was "Ministerial Burma". The Enquiry was chaired by the lawyer and politician Dr Rees-Williams (later the 1st Baron Ogmore and President of the London Welsh Association), seated centre. The secretary was W.B.J Ledwidge (standing behind) a young man from the Burma Office whose khaki shorts and pink socks infuriated the Governor. Mr Ledwidge later became HM Ambassador to Finland. The Cambridge-educated constitutional and financial expert ICS U Tin Tut (to Mr Rees-William's right) was a key mover behind the process. (He had been indispensable to General Aung San in London and later at Panglong). There are many domestic reasons for the start of the civil war. But it's important to remember that it was WW2 that created the battlefields, set communities against one another, and left behind a small country awash in weapons.