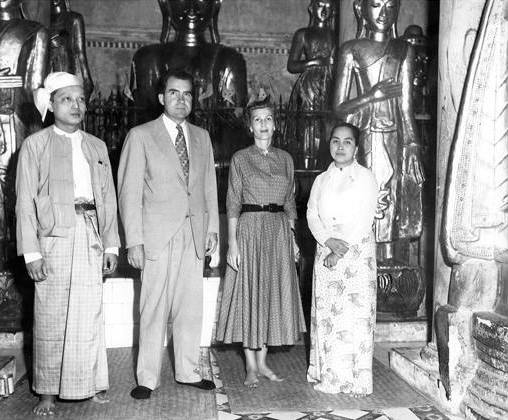 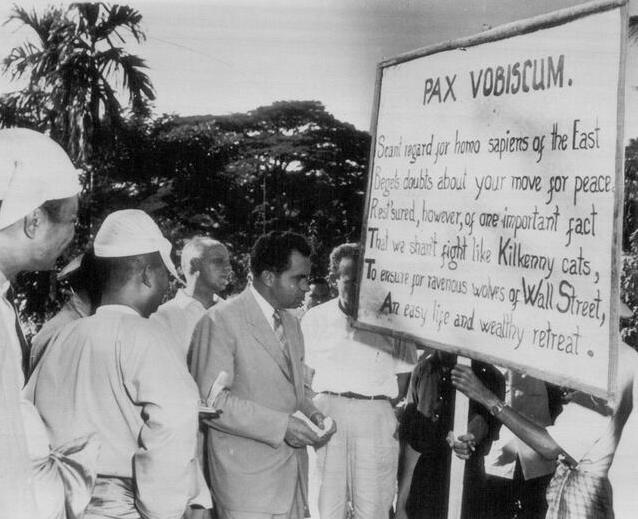 Richard Nixon's Visit to Myanmar in 1953

Richard Nixon, as Vice-President of the United States of America, visited Myanmar in 1953. The US papers at the time all reported on his confrontation with left-wing and anti-American demonstrators at Pegu. A very witty Burmese communist held a sign that reads:

Scant regard for homo sapiens of the East

Begets doubts about your move for peace.

Rest assured, however, of one important fact

To ensure for ravenous wolves of Wall Street

An easy lie and wealthy retreat.”

It was Thanksgiving Day and the Burmese were also able to rustle up a turkey for lunch.

Fewer reported on his trip to the Shwedagon. He and Pat Nixon wrote in the register: "For years we have heard of it, and we have previously seen pictures of it - but actually seeing the Shwedagon exceeded even our greatest expectation. The people of Burma have provided for all the world to see one of the greatest cultural monuments ever erected by man."

The first photo is of Vice President and Mrs. Nixon with their two guides, U Thant (then Secretary to the Prime Minister) and Daw Khin Kyi (mother of Daw Aung San Suu Kyi). The rest are of Nixon in a Burmese costume at Government House, Rangoon with (from left to right) Irene Ba U, President Dr. Ba U, and Mrs. Nixon.